"One of those goals was scored by me!"

Alberto Smalleno is a player of Max Spayne and The Yellow Submarine.

As his name implies, he is smaller than most players. He is probably the smallest character in 442oons. He used to have a deep voice (as is shown in his first appearence), but his voice later changed to a high pitched tone.

His name is a pun at how he is small.

He scored a goal against Saintshampton in Leavethepool's victory 6-1 for the League Cup, but since Divock TwoorThreegi touched the ball, the goal was considered TwoorThreegi's. While Divock Twoorthreegi was celebrating his apparently three goals, Smalleno came and said that he had scored one of the goals. Divock didn't like it and drove him away with a club saying that Smalleno would change his mind by the morning. At that time, we could only see the top of Smalleno's head, because he was too short to fully appear. He first spoke with a deep voice, but this was later changed.

The first time that he fully appeared was in Liverpool 4-3 Bruiseyou Dortmund for the Europey League 2016, even though it was a minor appearance, since he did not do much. This was in April 2016.

He appeared in Leavethepool 4-0 Cleverton for the Premier League and Yellow Submarine 1-0 Leavethepool for the Europey League, talking with Adam The Llama and Philippe Cuteinho, respectively.

He also appeared dancing to the Kolo Chant with the rest of Leavethepool's squad.

He was given a redesign for the Arsenal 3-4 Liverpool video in August 2016, changing his hair style and colour. In a 442oons video made for Soccer AM, Inn off the Bar, he spoke with a notably Spanish and light voice.

He is becoming one of the most popular 442oons Leavethepool characters.

Suarez try swapping Coutinho (now a barcelona player) with him but got rejected by Klopp. He would move to Villarreal in the same year. Curiously Villareal already have other player named Moreno

Once again he won the Europa League, this time with Villareal.

Smalleno and Divock had an affair because Divock claimed that he had scored a goal that was technically scored by Smalleno against Saintshampton for League Cup 2015. While Divock was celebrating his scored goals, Smalleno came and claimed that it was him who have scored, so Divock scared him away using a baseball bat.

In a later game against DVD, while the whole team is giving hands, Divock is avoiding to give his hand to Smalleno, what could possibly indicate that they hadn't made up yet.

Smalleno is seen talking and petting Adam's neck before the match of Leavethepool 4-0 Cleverton in 2016. In Living for The Prem, a 2016/17 Premier League preview song, Smalleno can be spotted riding Adam the Llama in the crowd.

Both of them sail in the Red Submarine to play against The Yellow Submarine. Before the game, Samlleno is talking with Phil while the later is having a seasick.

While Daniel stayed in the bench in a match against Tottenham, he made a disgusted face. One theory explains that it was because Smalleno farted right close of Sturridge. Smalleno apologizes for that.

Milner makes a joke about how Smalleno is "dodgy in the back" after Smalleno started farting. Unfortunately, the joke didn't result.

Smalleno in his first appearence with Divock. 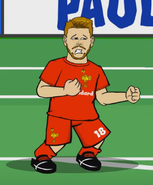