Adam the Llama is a player of Engbland and Brighton. He formerly played at Scousehampton, Jason Bournemouth, and Leavethepool.

He is a llama with orange fur. His torso is painted like the shirt of the club or country that he is playing for. As a llama, he can spit his saliva and he eats grass [1].

He can't speak human language so he makes llama sounds instead and there are subtitles translating his speeches. He also is used to carry people and other stuff, either pulling a cart or being ride (although he does not enjoy the latter).

He looked like a real llama until the August 2016 video Arsenal 3-4 Liverpool, where his head was changed to that of Adam Lallana's.

The reason of him being a llama is a pun on his truly name Adam Lallana, which sounds as Adam the Llama.

His first appearence was in his debut for Leavethepool in the Premier League 2014/15, where Brendan said he would be in the place of Suarez (who went to Bancelona). Some Leavethepool players liked it but others were shocked.

He was spotted in the crowds of the August 2014 video about Man Sheikhy and Liverhamptonpool with fellow new signing Not-So-Super-Mario Balotelli.

In October 2014's Thirsty Games video he carried Sider Magnerslet and Imred Can into Brendanfield (now Jurganfield) in a cart.

In one match against Manseventher United in 2015, Phace Jones broke him in two and he was replaced by Stevie Wellard.

He had a small participation in We Know Sweet FA Cup 2014/15 season during a rap battle, where he was assisted by Not So Super Mario and headbutted Alan Buttew.

He was among the Leavethepool players who wanted Klopp to be their new manager after a terrible season start.

He scored for Leavethepool the victory goal against Notrich in the Premier League Wacky Races 23, although he accidentaly threw Alex Neil into Klopp and made Klopp lose his glasses and hit something with the Helikloppter. He was ridden by Yougurn Klopp in the opening titles of the Madman Sakho workout DVD video, from April 2016.

He appeared in Europey League 2016 and was broken by Scholosey during his Ginger Ninja transformation. He failed to score a goal against DVD, but the team managed to win the game.

For the Engbland Euro 2016 series he was ridden by Vladimir Putin in the Rusputin 1-1 Engbland video. The rest of his appearences were just missed goals. He did not have a starring role in the series.

In Livin' For The Prem, a 2016/17 Premier League preview song from August 2016, he was seen being ridden by Alberto Smalleno in the chorus. He was re-designed, given a human head, for the Arsene 3-4 Liverpool video a few days later. He also appeared in the first match of Chelsea vs Liverpool for the Premier League 2016/17, where Bernieslaven Ivanitch stepped in his hand.

He went to La Manga to train with his team. In this trip, he danced with his teammates, had drill sessions, and swam at a pool.

During the Transfer Window time before the new season, Adam helped Klopp by going to see Virgil van TracSaint in a library so the Saintashampton boss wouldn't didtrust. He also danced to Danny Ings (disguised as Luis Fonsi) in a attempt to convice Phil Coutinho to stay in Leavethepool.

He appeared in the opening song for Premier League 2017/18 on top of Leavethepool's bus along other teammates. He was the only one to show worry seeing Philippe Cuteinho tied up and forced to stay in the club.

Not So Super Mario Balotelli

Adam and Mario can be spotted in the crowd in a match against Man Sheikhy (both of them were playing for Leavethepool at the time) for the Premier League 2014/15. While Leavethepool was losing 3-1, the llama was trying to discover what was under Mario's big hat. For every time that Adam discovered what was under the hat, he got unpleasant surprises, like a rocket that exploded on them and a Man Sheikhy shirt.

Adam The Llama also assists Mario's goal against Tottenham. Both of them punch and knock out Alan Buttew in the FA Cup 2015 Rap Battle.

During Leavethepool 1 - 2 Manseventher United, Phace Jones accidentaly broke Adam The Llama in two so he was replaced by Slippy G.

Adam The Llama made Simon and Can entrance in The Thirsty Games by pulling them in a cart.When Leavethepool squad was training in La Manga, Simon Mingingsave claimed to have saved Adam The Llama, Sadio The Mane, Ragnar Balaklavan and Calvin Clyne from drowning in the pool. Since that was not the case, Adam called Simon a liar.

Smalleno talks and pets Adam's neck before the match against Cleverton in 2016. In Living for The Prem, a 2016/17 Premier League preview song, Smalleno can be spotted riding Adam The Llama in the crowd.

Adam The Llama was among the Leavethepool's players who wanted Klopp be the next manager, singing a song called "Klopp to the Kop". Their first interaction was when Adam scored the winning goal against Notrich City and accidentally threw Alex Neil in Klopp, who lost his glasses and hit something with the Helikloppter.Klopp also ride Adam The Llama in the opening of the video about Madman Sakho's Fat Burners, but Adam didn't feel very happy about it.

Alex Oxeleonardo Chamberlain and the linesman

During a match for their country against Sham Marino, Alex assisted Adam's goal, but the linesman marked him offside. They went complain with the linesman and Adam spat his saliva in the eye of the linesman.

Bernieslaven steps in Adam's hand during a match in Premier League 2016/17. Despite this, the referee didn't give him a card.

One of the theories about the white substance in Ghastly Tongue's mouth was that Adam the Llama had spat in his mouth when Ghastly said a swear word.

In the reaction video of Englbalnd x Rusputin for Euro 2016, Vladimir tells the reporter that he had ridden Adam The Llama bare-back. Adam didn't like it.

Klopp presumably sent Adam the Llama to check Virgil when he was reading in the library so Klopp could talk to him about his transfer to Leavethepool (Virgil played at Saintshampton). When Claude Puel, Saintshampton's coach, came to investigate Virgil's strange manners, Virgil petted Adam the Llama and said to his boss that he was just talking to the llama. Adam just looks at Virgil's hands and squeals.

Adam is the only player that looks shocked at Firmino keeping Coutinho tied up. 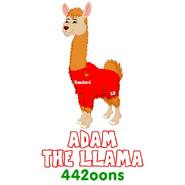 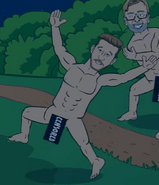 His sprite in Super Mario parody.

During We Know Sweet FA Cup 2014/15 with Not So Super Mario Balotelli.

In the opening of Premier League 2015/16 with Leavethepool's squad and former manager Brendan the Elephant Seal.

With fellow Engbland players during Euro 2016.

Adam the Llama scoring for Leavethepool.

During his days in La Manga. 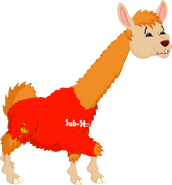 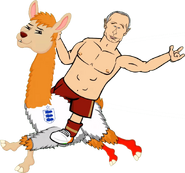 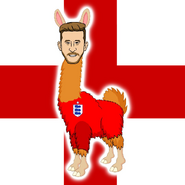